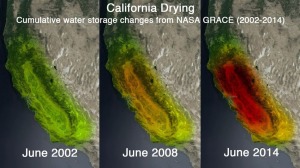 California has always been hot but never this hot! For the past few years Grace ( a NASA machine that cycles the Earth and checks where shortages of water are)   Spotted California getting dry. In 2002 California was fine, untouched. In 2008 Grace started to show California was starting to get short of water. Then finally last year in 2014 California was red showing that California was in a drought. The ground is sinking feet there and the water too, Mayor Brown has cut off 25% of the water supply in California! Effecting 25 million people! What is causing this drought two things. First is what usually causes droughts, not enough rain. The 2nd thing is pumping water. That’s right California has been pumping and drilling for water. Farmers across California have been pumping for water for their own needs. Like one farmer and his neighbor are drilling for water so they can  have a well. Scientists say that even if they had rain or snow every other day for 4 months ( October) California would still be in serious trouble. California’s drought has been declared an exceptional drought, meaning some communities will eventually run out of water, for communities in 10 counties water could run out in 60 days. Many lakes and rivers have dried up will California ever be wet again?